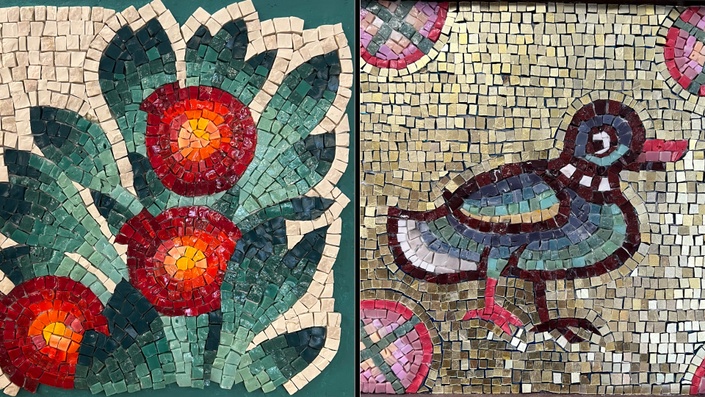 Learn how to create modern mosaics with ancient techniques

Enroll in Course
off original price!

Course intro and interview with Arianna Gallo and Tami Macala

Learn how to work with some of Arianna's favorite tools and materials while she shares her tips and secrets for creating her Direct Ravenna Style Mosaics!

Every mosaic that has been created started with one piece… the first piece. Imagine taking a step back and learning how to create a mosaic just like they did many years ago. The methods they used were practical and made sense. You will learn these methods in our latest course “The Direct Ravenna Method with Arianna Gallo”. The most important step is learning how to apply each piece into a temporary binder or substrate. Nothing is permanent until the mosaic is complete and each tesserae is where it should be.

Learning the technique in this way allows you to work slowly and without rushing to apply each piece into a permanent curing mortar. You will learn how to create your mosaic on a non-permanent base with either basic ceramic clay or lime putty. This process can be done with any image. Arianna provides four different images to choose from as you watch her create one of them from start to finish.

In this course Arianna will be making a replica of a small section of the mosaic in the Mausoleum of Galla Placidia. She has included three other options that are easy to learn as she demonstrates each step of the process.

Arianna grew up in Ravenna, Italy and has studied this method of creating a mosaic since her high school years. We feel there could not be a more qualified person to learn this method from.

In this course Arianna will demonstrate:

This course is broken up into chapters to make it easy to navigate. Arianna has added modifications that include using ceramic clay instead of lime putty and flour glue instead of rabbit skin glue. Arianna will be teaching this entire course with the traditional methods used in Ravenna from the last century. However, due to the limited access to some of the original materials, she also demonstrates how to achieve the same outcome by using basic ceramic clay and flour glue while practicing the original method. You will be able to easily follow along as each step has been thoroughly demonstrated to give you the best learning experience possible.

Included in this course is a PDF for download of the suggested tools, materials, and resources.

Arianna has included four images to choose from to create your mosaic. 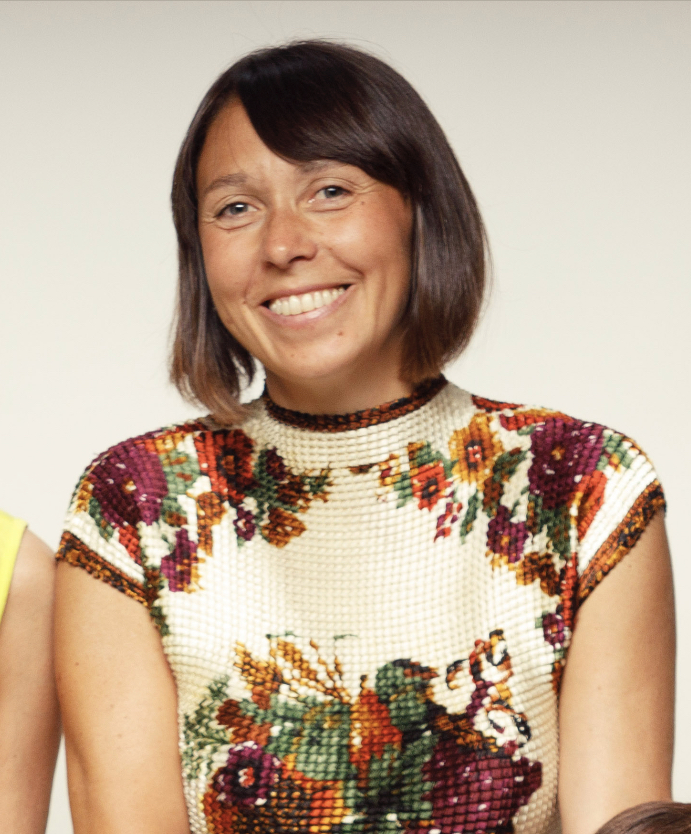 During and after her training, Arianna worked as a restorer (1999-2004), she has participated in the conservation of the prestigious Domus dei Tappeti di Pietra and the Mausoleum of Galla Placidia in Ravenna.

Between 2000 and 2005 she taught mosaic techniques at the CISIM, International Center for Mosaic Teaching Studies, a specialist international mosaic school based in Lido Adriano, Ravenna.

Arianna has participated in the making of the replica of the monumental Alexander Mosaic for the House of the Faun, Pompei (2002-2004), the most famous and largest opus vermiculatum mosaic in the world.

Arianna opened Koko Mosaico in 2005, an independent mosaic studio in the heart of the old city of Ravenna, together with her husband, the visual artist Luca Barberini.

The works created by Koko Mosaico range from copies of ancient mosaics to commissions of original modern and contemporary mosaics, suitable for interiors as well as external architectural spaces.

She also collaborates with international contemporary artists, interpreting their work in the mosaic medium. Among the most important projects of the studio, the translation of Domingo Zapata's works for the Venice Biennale, 2013.

The activity of Koko Mosaico is supervised by Arianna, creative director of the laboratory, a multifaceted figure who deals not only with the conception, design and production.

Arianna and her team continue to explore the language of mosaic, while never losing sight of its ancient traditions, also with the teaching of mosaic techniques.

Students from all over the world come to Koko Mosaico willing to learn this ancient art, also mosaic artists eager to broaden their knowledge.

The Koko Mosaico team is capable of mastering the most disparate techniques of execution.

The workshop is an open studio, full of light and international in character: a space where ideas become reality.

Arianna is also responsible for overseeing Italian and international commissions and all artistic collaborations at the studio.

She has accrued significant experience in organizing workshops both abroad and in her studio in Ravenna, where she hosts Erasmus exchange students including those with the Academy of Fine Arts and the Mosaic Conservation programme held at the Ravenna branch of Bologna University.

She has organized a range of mosaic projects and has collaborated with the public sector, with museums and universities both in Italy and with several independent mosaic studios in Europe, the US, Canada, and Australia.

As an artist, she regularly exhibits and has recently participated in exhibition Piccoli Mosaici at NeoHouse, Tokyo; Kyoto Mosaic Exhibition, Japan, and shows in Florence and Rome, as well as Ravenna.

Arianna has won many prizes and recognition for her artwork and its role in social engagement. In 2019, her interpretation of the artwork Scar by Chinese artist Peng Shuai won the GAeM award.

Icon of her style, Lens was acquired by MAR, Museum of Art of Ravenna in 2009.